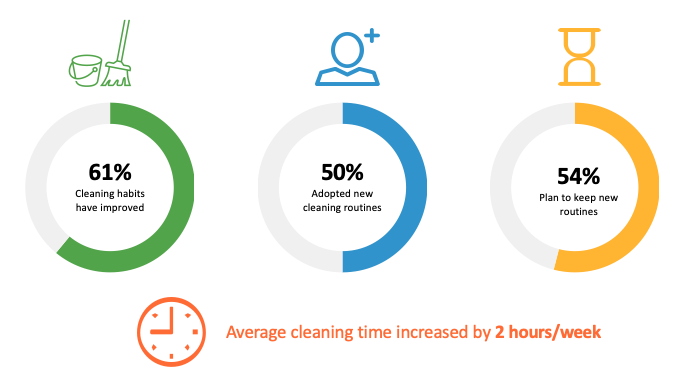 It's been a whole year since our lives were upended by the pandemic. People everywhere had to quickly adapt to new routines, behaviors, and a new reality. While some changes were unwelcome and short-lived, others were positive and look to be sticking around. According to a recent survey, one of those positive, lasting changes is Americans' cleaning behavior!

The survey was conducted by SC Johnson, who manufactures numerous cleaning products such as Windex and Scrubbing Bubbles. The research showed that 61% of Americans believe their cleaning behavior has improved over the past year, 50% have adopted new cleaning routines, and 54% plan to make their new cleaning routines permanent. And it's not just a trivial amount of extra cleaning either - those reporting that they've improved their cleaning behavior are averaging an extra two hours per week compared to a year ago.

Perhaps one audience who might not be so thrilled about these changes is children. 44% of parents participating in the survey reported that their kids are helping to clean more than before the pandemic began, and 71% expect their kids to continue their new cleaning routines after the pandemic ends.

Interestingly, younger adults are twice as likely to say they enjoy cleaning than their older counterparts.

Not only that, millennials are likely to spend the most time cleaning each week, averaging an entire workday at a whopping 8.2 hours/week!

Given the increased amount of time most Americans are spending at home and the extra focus on cleanliness in the age of COVID, I'm not surprised by these findings. I know in my home we are part of this majority that cleans deeper, longer, and more frequently than before the pandemic began. I'm glad to see that we're not alone in adopting these new habits and routines, and I'm excited that the data shows they'll be sticking around.

Stewart is passionate about all things research. Designing studies, analyzing data, and moderating interviews - Stew does it all. Outside of research, he enjoys trying new recipes in the kitchen and exploring the OKC food and craft beer scene with his wife, Jade.